Kombucha. Kom-Bu-What? It's a fermented tea sold in many stores that has garnered a very loyal following. If you are a kombucha newbie, ask around your organic or "foodie" circles, and they'll likely sing the praises of this wonder beverage. Kombucha (kom-BOO-cha), has been called "the tea of immortality" for thousands of years! And at a very reasonable 30 calories per 8 oz (2 grams sugar), it won't break the nutritional bank!

Gunther W. Frank, considered by many to be the world authority on kombucha, says "the kombucha culture looks like a white rubbery pancake. It is a symbiotic culture of yeast and other microorganisms. The culture is placed in sweetened black or green tea and turns the tea into a sea of health-giving acids and nutrients. The kombucha culture feeds on the sugar and, in exchange, produces other valuable substances which change into the drink: glucuronic acid, glucon acid, lactic acid, vitamins, amino acids, antibiotic substances, and other products. The kombucha culture is, therefore, a real tiny biochemical factory."

PROBIOTICS ARE THE NEW BLACK AND KOMBUCHA HAS 'EM.

The term "probiotic" means "for life," and applies to any supplement/food containing live bacteria, i.e., friendly microbes that dissolve the harmful microorganisms and cholesterol in the gut. A German study of 479 participants found that daily supplementation of probiotics during a three-month period shaved two days off common cold episodes and reduced the severity of symptoms (Source: American Journal of Clinical Nutrition). Immune defense, better digestions, relief of IBS, prevention of kidney stones, are all proven probiotic benefits.

So when you read the label on a bottle of store-bought kombucha, the myriad health claims that the tea supports digestion, metabolism, immune system, appetite control, weight control, liver function, body alkalinity, anti-aging, cell integrity, along with healthy skin and hair all stem from the beneficial bacteria lactobacillus acidophilus, and dozens of various probiotic strains. Kombucha coats the stomach with digestive enzymes and live probiotic organisms that remain dormant until they come into contact with the sugars in the digestive system. Then the party begins!

When compared to one container of Activia yogurt, kombucha gives you more probiotic bang for your calorie buck. You'll save 70 calories, 2 grams of fat, 55mg of sodium and 15g of sugar by chugging down a bottle of GT's Gingerade. Anything else? You won't lose any of the probiotics!

Wow! Could kombucha be a new super food? For all those purported claims, no wonder kombucha is expensive ($3.99/bottle)! But you can also elect to get the benefits of kombucha via a regular tea bag. Yogi Tea has a Green Tea flavor with kombucha. We're not clear on the health aspects of the bottled stuff versus a bag.

Since the human gut houses 400 different species of good and bad bugs, our bodies need something to balance good and evil. So, think of the active cultures in kombucha as the Batman and Superman of our tummies, constantly balancing both good and evil bacteria.

But like with most dietary supplements there are caveats. Brent Bauer, an internist at the Mayo Clinic, writes "Kombucha tea's benefits are based on personal reports, and lab and animal studies. To date, there hasn't been a single human trial reported in a major medical journal. This doesn't mean that Kombucha tea can't possibly have health benefits; it just means that at this time there's no direct evidence that it provides the benefits it's reported to have." He continues to recommend other precautions especially for those who elect to brew the tea themselves.

A few other articles opposing kombucha are available here and here.

BUY IT OR BREW IT?

Before the assembly line, drinkers brewed their own. Few ingredients are needed, mainly tea, sugar, water and a kombucha culture (called a mushroom). If you want to brew your own, you'll find a plethora of information with very little internet sleuthing required. Really you just need to get the culture.

But we prefer a much easier route to the tea! Walk or bike to the store and slap down $4 to get a bottle of your own. Kombucha Wonder Drink is pasteurized (slowing microbial growth), while GT's Kombucha is raw and organic. If you're a bit leery of having active cultures in your gut, but still want all the vitamins, reach for Wonder Drink, but if you want to try the real deal, then GT's is the way to go. 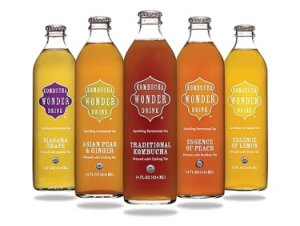 I have been making kombucha all summer. It's super easy and good for digestive health. It's really cheap to make. The natural flavor of it is a cross between dry champagne and apple cider vinegar.

I love it. I love the GT's brand. I like the original flavor and the green (Multi-Green) one.

I found Kombucha to be an excellent substitute for coffee. It seems to give me energy. The mango flavor (Synergy Mystic Mango) is ideal for first timers.

After reading the reviews and seeing what our peers thought of kombucha, it was my (Dan's) turn to taste the tea. I found two different brands at my local Hyvee: Kombucha Wonder Drink in the traditional flavor and GT's Organic Raw Kombucha in the Gingerade flavor.

The Wonder Drink brand was tolerable, given the pasteurization and simple flavor (brewed with oolong tea), while the GT's Organic Raw was a kick in the taste buds. I'm always munching on the sliced ginger when we get sushi, so this flavor was so much more attractive to my taste buds than the rest.

Synergy makes a better flavored kombucha, but the Wonder Drink brand was tolerable, and probably more for the purists. Since I only tried one bottle of each, it's not fair to give it any number of thumbs up or down, but let it be known: it's pretty good.

Regardless of what supporters and skeptics say, try to find a bottle in your local store and give it a shot. At the very least, if someone catches you drinking it, they'll say "what the heck is that?" Now you'll have some material to break the ice with.

EDITOR'S NOTE: Dan Gaz contributed to this article. Dan is a Fitness Associate at the Rochester Athletic Club, in Rochester, MN. He has both a Bachelor's and Master's Degree in Kinesiology from Indiana University.

Kombucha tea is a great natural detoxing mixture with enzymes, gluconic acid, multivitamin, and bacterial acids. Extremely useful for digestion, weight loss, and immune system. It's has a good impact on health. I think it is a great powerful drink for everyone. We must add Kombucha in our daily diet.

We have a company in Austin, TX Boundless Nutrition that came out with a Kombucha Soda called Live Soda. I tried it and like it. I think it is a good mix of soda and kombucha that gives people the best of both worlds in the drink category. I think it is the first of it's kind.
http://boundlessnutrition.com/test/dr-better-live-soda/
http://www.bevnet.com/reviews/livesodakombucha

Actually, all kombucha is pretty much a "soda" since it is naturally effervescent (naturally carbonated.) Live Soda certainly has less sugars than some (such as Bucha) but that is because Live Soda uses stevia as a sweetener. We'd certainly be interested in sampling. The Athletic-Minded Traveler Team likes Bucha (but not all the sugar) and we like GT Original but not the "floaties."

I honestly have never tried kombucha before. My source of probiotics were always supplements and yogurt. Sounds like kombucha is a nice alternative to yogurt :)

How you can call Live Soda real kombucha is beyond me. It's artificially carbonated and contains Stevia. That's not real kombucha.

We've been brewing kombucha tea for 3 months now, when we've ran low we purchased a few bottles of GT'S brand at our local health food store ,it's great and now we have some bottles to store our brew in when it's reached the PH we prefer. my husband and I love it for the probiotics, enzymes ,B vitamins etc. in this day and age with all the depleted soils ,toxins etc. we take it along with all our other vitamins, minerals and herbs.

Kombucha must be kept cool after it is placed in sealed bottles, or else the culture will die. The bottled stuff is bubbly and tart, and I find that the benefits are increased by consuming it on an empty stomach as a morning elixir before breakfast. The so-called Kombucha teabags, on the other hand, is not bubbly or tart, and I doubt there is any active culture in it, especially after it is heated in order to brew it. GT's Kombucha makes the most potent bottled Kombucha available, and I prefer it over the other brands. Trilogy, Gingerade, and Botanic Elixir #9 are my faves!