Maple Water vs. Gatorade, Bai5 and other Recovery Options

Nothing is more satisfying after a hard workout, especially in the hotter summer months, than grabbing an ice cold drink. Most often our team reaches for water, but sometimes we crave more. But, the Athletic-Minded Team has varying tastes when it comes to rehydration; some go for the classic Gatorade or lower calorie option, G2, while others prefer some of the newer products on the market like coconut water or Bai5. So when we recently heard of an up and coming product in the world of sports and health drinks, we just HAD to get our hands on it!  And we did!

Maple Water. The drink is gaining traction on the triathlon and endurance sport scenes up in Canada, and is now making its way down to the States. Two small companies in the Northeast, Vertical Water and DRINKmaple have started regional production in the U.S., and Vertical Water is slowly achieving shelf space in national grocery stores such as Sprouts and Whole Foods as well as specialty grocers such as Jimbo’s. DRINKMaple, cofounded by two Ironman triathletes, is currently available in the northeast only. Another producer, “Wahta Pure Maple Water”, sources its water in Canada and is available at The Fresh Market and online at Amazon.com.

We taste tested all products from all 3 producers to see how Maple Water stacks up against what we stock in the Team fridge. 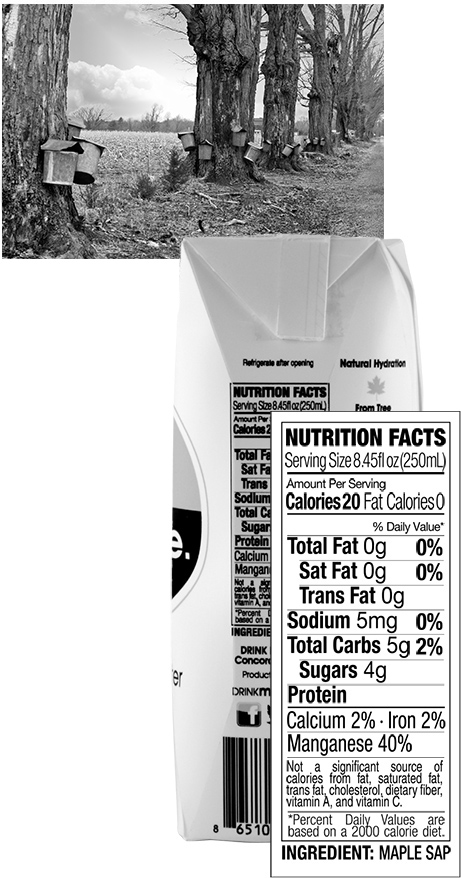 Why we like it: It’s a low calorie option that is naturally hydrating and, according to the Maple Water producers, packed with vitamins, minerals, and antioxidants. No added anything, just water straight from the tree. However, the only real "nutrient" that shows up on the product label is manganese. And while manganese does support bone growth, blood sugar regulation, and protection against free radicals, most people get enough of the trace mineral in their regular diets (via oats, spinach, brown rice, and pineapple).

Does it pass the taste test? The taste is subtle and sweet. Think crisp, refreshing water with a hint of maple infused sweetness at the end. We think Maple Water will appeal to purists who want something more than regular H2O but without the added sugars etc. of other hydration options.

Verdict: Most of our taste-testers were surprised by the taste. It wasn’t what they expected, but they enjoyed it. Athletes were more intrigued than less active folks. Price was a concern since the taste so closely resembles water. Packaging was also noted. Both Wahta and Drink Maple are small at 8.45 oz. versus Vertical Water’s 16.9 oz package. All agreed the bigger size is better. (Approx. $2.99 for Vertical Water's 16.9 oz) All agreed that this is truly a "natural" drink!

Bonus Point: Testers didn’t realize this, but we think it’s worth mentioning that tapping trees for maple water provides forest owners with a financial motivation to keep trees longer versus cutting for lumber.

How the drinks compare: 8 oz serving used for all data.

Why we like it: It has longevity (first developed in 1965!) going for it! We grew up on it. Gatorade’s formula for success relies on a blend of carbs and electrolytes that quench thirst and rehydrate better than water alone. The main ingredients behind its formula are water, sugar, and salt. The lower-calorie option, G2, uses sucralose to offer the same electrolyte formula with about half the carbs and half the calories. 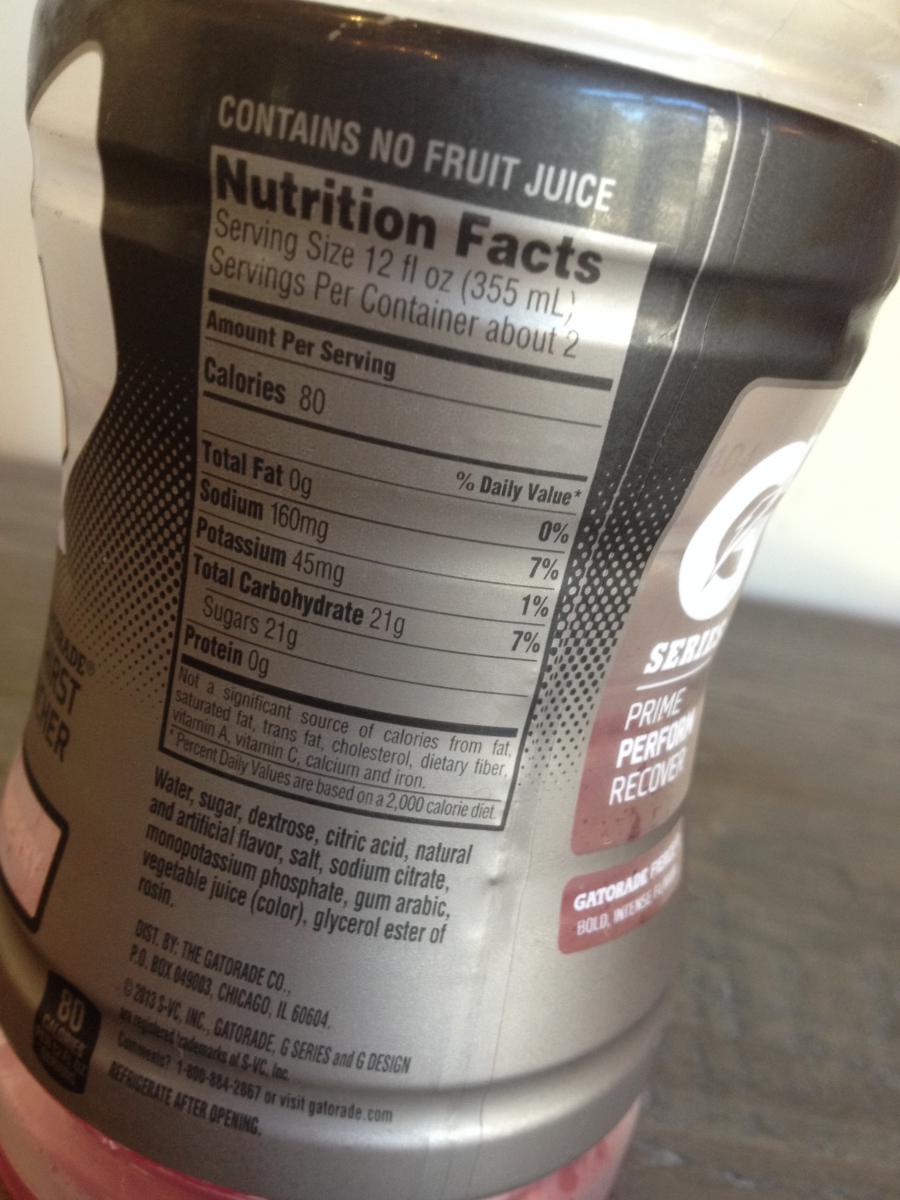 Does it pass the taste test? The sweetness of Gatorade is a huge turnoff for some athletes, though the lower calorie option packs less of a sugar punch; but most of our testers prefer sugar versus the chemical sucralose. We have team members who rank it #1 for recovery and those who won't go near it!

Verdict: Though useful after long, arduous weekend rides or marathon cardio sessions, Gatorade isn’t a very practical choice for a daily go-to hydration drink because of its calorie and sugar load (21g of sugar per SERVING). Recovery is the best use for Gatorade. 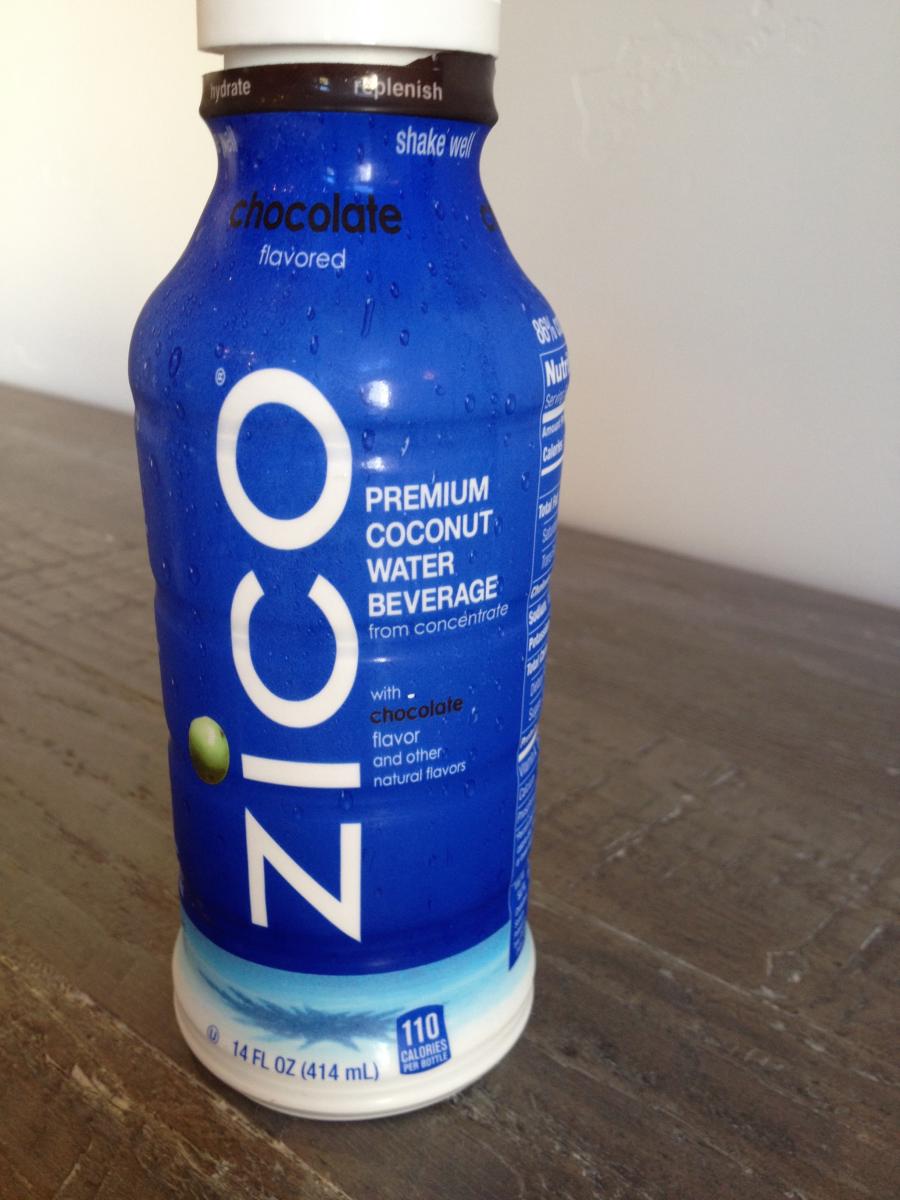 Why we like it: Coconut water was one of the first products to really market itself as an “all natural” alternative to sports drinks. Full of electrolytes, including more potassium than a banana, and natural sugars, it seems like the perfect choice for after a hard workout. One staff favorite is the Chocolate flavored Zico coconut water, sort of a hybrid between chocolate milk and coconut water.

Does it pass the taste test? Coconut water has a distinct taste and those who like it LOVE it. With its chocolate and coconut cream, Zico Chocolate is smoother and less "coconutty".  But it does have added sugars. If you like chocolate drinks, you'll likely like this. BUT we HIGHLY recommend that it be enjoyed super cold!

Verdict: Coconut Waters can be effective for rehydration post-workout. However flavored waters, like Zico's Chocolate (think pineapple and mango), are infused with fruit purees or added sugars. The result is a higher sugar count than the plain versions. Take a look at the chart to see the calorie differential -- 45 vs. 63 for 8 oz.

Why we like it: With over 100% of your daily Vitamin C and more potassium than a banana, Vita Coco is packed with quality ingredients key to recovery after a hard workout. This is a more "natural" alternative to sports drinks, when water won’t do the trick.

Does it pass the taste test? Coconut water is hit or miss in terms of taste. We selected Vita Coco, because it has the largest market share in the U.S. However, different brands have different tastes. We really like Taste Nirvana and it has no added sugar. If you're new to coconut water, experiment across brands.  And give it time. We have found that the taste "grows on you."  Vita Coco also sells coconut water in multiple flavors, but keep in mind that sweeter flavors have additional sugar (up to 8 grams more per container).

Verdict: Coconut water is a viable, natural, rehydration option. However, as with the chocolate Zico, be careful about substituting coconut water for water for general hydration. The calories and sugars are useful after a long workout, but they can add up quickly if you are drinking it on a regular basis.

Why we like it: Packed with antioxidants and a little kick of caffeine via "coffee fruit,", Bai5 is a low-calorie beverage that we like to sip on when water or tea do not sound good. While endurance athletes will need more calories and sugar post long workouts, Bai5 will hydrate, refresh and satisfy...if you like it!  We think of it as H2O plus. The low calorie count is courtesy of Erythritol vs. regular sugar.

Does it pass the taste test? With 10 flavors to choose from, there is bound to be at least one flavor that appeals to you IF you like a lot of flavor.  Our team favorites are Congo Pear, Molokai Coconut and Ipanema Pomegranate. However, some team members feel Bai5 tastes too artificial and has too much "going on." Ha, these are the Gatorade lovers. See? Varying tastes!

Verdict: Something to sip on when you don’t want water but don’t want to waste your calories on a beverage (such as Gatorade or coconut water). Definitely refreshing, but go for something with more electrolytes and carbs if you are looking to replenish your body after a long workout. (Approx $2/bottle.)

How do you hydrate after a workout? Be sure to leave us a comment and let us know. And if you have the chance, try Maple Water.

I am one of those people that broke away from diet sodas but only if I could find some sparkling flavor with less sodium, some antioxidants, and something that's healthier for me. I do like BAi5 for the healthier reasons it is verses diet sodas but the price is a little out of my budget.

I have also tried "REFRESHE ICE" which tastes very similar. Is refreshe ice just as healthy as BAi5? I battle with prices but is it going to effect my health if I pick inferior product?

How does "REFRESHE ICE" STACK IN YOUR HEALTH BOOKS AND taste buds? Is Refreshe ICE just as healthy as Bai5?
The price? 7 dollars for a 12 pack of, Refreshe ICE.

We assume you mean Sparkling Ice which comes in a tall, clear, plastic bottle and in flavors like Black Raspberry, Orange Mango, Kiwi Strawberry, etc.? If yes, then the KEY difference is the sweetener used.

We view Bai5 as superior on a "nutrition data" basis.
Some of the team likes Ice -- but others can taste the sucralose and feel it's way too sweet.

Has the team investigated watermelon water? Sugars are somewhat high, but it is another new option.

That's what I needed to know! Thank-you!

I get you about the slightly sweeter aspect. My health is not healthy right now and I frequently used to get sick on diet coke,diet Pepsi,and this diet orange crush sodas. Instantly within a week of cutting those drinks out and drinking sparkling ice and BAi5 not only did a inch of swelling around my ankles and legs go down but I was less sick.
I'm sticking to both BAi5 and Refreshe Ice but thank-you for your feedback. I'm loving your web site already on my way to a healthier life!